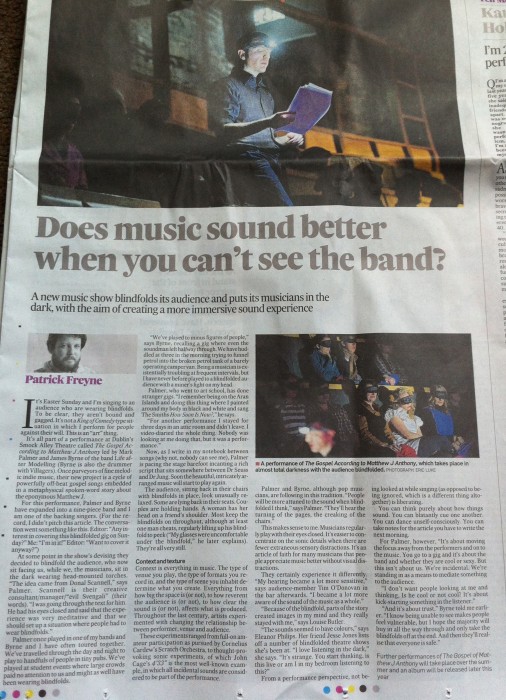 This blindfold gig which happened on Sunday and features in today’s Irish Times was produced by Scanarama with Life After Modelling who we’ve been working with on and off since before our company was even formed. The band have been on hiatus for quite a few years and this gig was their first live event in eight years. Upon hearing their upcoming ‘The Gospel According To Matthew’, our instant feeling was the usual rock circuit was to be avoided for Life After Modelling.

There were many reasons for this but chief amongst them was a feeling that it’s getting harder and harder for artists to get noticed today as it gets easier and easier to release music into the world and as music becomes easier to obtain – similar views expressed by Thom Yorke in his excellent interview with Alec Baldwin which aired yesterday. The other main reason was that the songs on ‘The Gospel According To Matthew’ had a narrative structure and a central character.

The idea was hatched that Life After Modelling would turn the album into a show for theatres. The audience would get to sit in comfortable seats and enjoy the music without distraction.

Easter Sunday in Smock Alley was the start of that process. When we first approached Patrick Sutton and Cliona Dukes about putting the show on there they agreed straight away and have been incredibly supportive every step of the way. This first show was all about giving the songs and script an airing, letting them loose and seeing what people made of them.

There was much discussion beforehand about how the audience would react, would they peek, would they last the whole performance. They did love it and the word of mouth is building already.

This is only the beginning of helping Life After Modelling bring their creation into the world and already the reaction has been amazing, which is really encouraging.

The next stage is to meet with dramaturgs and theatre producers to see what help we can get from that world to bring this music based project deeper into theatrical territory. All suggestions welcome!